Being Called Up For National Service 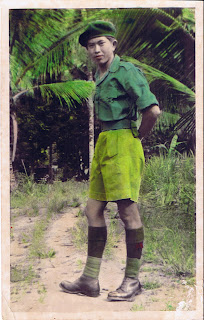 It was early 1955 while I was in Sec 2 (known as Standard 7 then) that my school was informed to send all pupils of the age 18 to register for National Service. So one fine morning, Bro Vincent drove about five or six of us of the right age to Beach Road to the Singapore Volunteer Corp (SVC) HQ to get us registered for National Service. The notice would come later.

The Notice
At around May 1955, the letter from HQ was sent to me to report for formal registration and training. At the time, we were still under British Rule though we had our our elected chief minister and assembly men. To train under the SVC - a British oriented regiment - was like joining the British army, and we Chinese hated it so. There were suggestions that I should go back to China to avoid being a British soldier, so a struggle within me started to evolve. I felt lost.

I didn't want to be regarded as a British soldier. All my elder brothers agreed that I should go back to China. My parents, especially my father, was not with them. He did not want me to leave the family and go to China where the future was so uncertain. He wanted me to stay and turn up for National Service training. That made me even more confused.

But someone had to make a decision and my father did. I obeyed him and so turned up for enrolment.

This was a great change in my life and it affected my school performance. My form teacher, Rev Bro Paul Goh Seng Chan noticed the change in me. He saw me personally and after knowing my problems, gave me a lot of advice and encouragement.

My Problem
My NS training was like this: Twice a week - Tuesdays and Thursdays from 5pm to 7pm. Every month, there was a weekend in-camp training from Friday night to Sunday noon.

On top of that, there was an annual camp lasting two weeks at the end of the year. So, at the start, for every Tuesday and Thursday, I would rush home to my house in Lim Chu Kang, change into army uniform and cycle that two kilometres to the bus terminal at Thong Hoe village. I then take a bus to Queen Street terminus, change to a Tay Koh Yat bus to Beach Road and then walk to SVC HQ at Beach Road where we would start our training.

The total journey time to go home and rush to SVC HQ took me three hours.  Training ended at 7pm. By the time we were dismissed, it was half an hour later. My journey home took me another 1 to 1.5 hrs to 2 hrs. By the time I was settled to do my homework, it was about 10pm and I would be usually dead tired.

The following day in school, I was often tired and dozed off at the end of the day. As a result, although I topped my class in Term 1 before all that NS training started, I was 4th in Term 2 and 7th after the final exams. This was what shocked my form teacher Rev Bro Paul.

Suspected Girl Trouble
Rev Bro Paul interviewed me to find out the cause.

He must have thought I was growing up and was developing too much of an interest in the opposite sex. First, he gave me a book on decency. I remember that it was about parts of a female body which were very sensitive topics to growing up boys like me. He advised me to behave decently towards the opposite sex. But that was not my problem actually.

Then during the Term 2 exam, there was a composition title with the words "The Most Unforgettable Event In My Life". Without hesitation, I zeroed in on the question and revealed the terrible experience I went through during the initial stage of my NS to the added problem of my then situation, namely, the extra time I had to spend attending the NS training twice a week. I was surprised that I scored high marks for the essay! It also prompted Rev Bro Paul to give a talk on NS to the class, stressing the importance of us Singaporeans being trained to protect our country.

The Solution
One afternoon, he spoke to me in a kind of interview or couselling way, first stressing on the duty as a citizen. Then he proposed that during my training days - instead of going all the way home to Lim Chu Kang to prepare myself for training that I should proceed to Beach Road from school. I could bring my army stuff along with my school bag. I could stay in school to study and do my homework while waiting from 1.30pm to 4.30pm. By the time I reached home late, I would not need to be doing my homework anymore!

I agreed with Rev Bro Paul that his suggestion was a good idea and decided to follow his advice. It was proper Time Management. Although it was quite troublesome for me to bring my army uniform and boots with my school bag etc., I managed to save a lot of time by doing my homework in school till 4.30pm. When that time came, I would start off for my National Service training in Beach Road.

About Pre-independent Singapore National Service
I was called up for National Service in June 1955. I was in the third batch of Singapore NS. We underwent six months of Basic Training, mastering footdrills and the handling of the 303 rifle which was about 10 lbs in weight. Training was twice a week with two-hour sessions from 5pm to 7pm. After six months, we had a Passing Out Parade, which meant we had passed our BT. We were then posted to different units. There wasn't a Commando unit at the time so I joined the Infantry or 'foot soldiers'. Training was reduced to once a week for three years.

So I passed my BT at the end of 1955 and ended my NS training at the end of 1958. After that, we were put in reserve for seven years. No active Reservist training for us. We just had to report back annually for address and other particulars like job description, etc. We didn't have to report after Singapore joined Malaysia in 1963. By then, my NS was all but over.

Editor's Note: The National Service Ordinance issued by the British in 1952 (but taking effect in 1954) caused a lot of unhappiness amongst the local Chinese populace. For one, many of the 18-20 yr olds were still studying (their studies being interrupted by WWII) and two, the Chinese were wondering why they had to serve the British as soldiers since they had abandoned them when the Japanese invaded. This unhappiness exploded into the famous 13th May 1954 National Service Riots, which is notable for a couple of reasons. For one, it marked the beginning of the militancy of the Chinese middle schools; two, the infiltration of the Communists into these schools to cause further outrage and riots (like the Hock Lee Bus Riots and Maria Hertogh one). More can be learnt here: 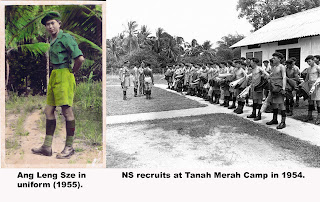