Being Useful To The Family 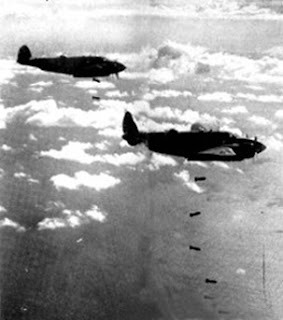 My parents, being busy farmers and pigs and poutry keepers, were very busy people. So we children were made useful in a few ways. We were given simple but tedious jobs like weeding or looking after the young chickens and chicks to protect them from preying eagles. Another task for us kids was the collection of dry twigs and branches to keep as firewood.

At times, our father would reward us with biscuits that he had bought from the only shop in Lim Chu Kang some five kilometres away. Our greatest joy was seeing him return carrying a pyramid shaped bundle wrapped in old newspapers and tied skilfully with reed straw that served as a carrying handle. It was our happiest moment with such 'luxuries'.

One day, my dad came home with four biscuit tins! Imagine our utter surprise and joy! We, of course, wondered why and what made my father do something like that. The year was 1941, sometime in the month of Oct. It was during this time that we the residents of Lim Chu Kang were issued with a notice that war was soon upon us. Besides that, we were told that Lim Chu Kang would most likely be a war zone given that the Japanese would attack from Johor just across the Straits.

At the time, we Chinese used to say the British gave "roti" (i.e. notice) - the very same word in Malay that meant bread or biscuit. So when my dad came home with the tins of biscuits, I thought the British had given them to us. It was much later, when my dad started to stow more foodstuff away (like beehoon, rice and sugar) that I began to realise that we were actually preparing ourselves for the war.

The next thing that excited me was when my dad built an underground air raid shelter. It was fun playing and hiding underground!

Then one evening the siren signal from the RAF Tengah airbase was heard blaring out. It was to warn us that an enemy air attack was iminent. We had earlier been instructed and practised what to do in the event of something like that. All the lights had to be switched off and everybody had to take cover. My dad quickly ushered our family (all nine of us) into the air raid shelter that I was so fascinated with all that time. Not long after, we could hear airplanes approaching and the return of anti-aricraft fire. None seemed to have hit their target. Then bombs started to drop and the earth beneath us trembled. But this so-called 'war' was soon over after two hours, and the siren sounded once more. It was a long continuous blast to indicate that all is safe and that we could come out of our shelters.