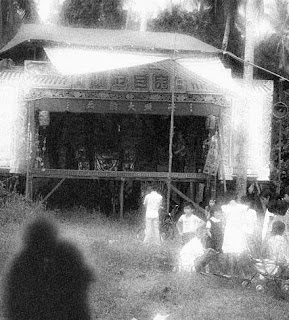 Sometime during 1957-58, a girl named Chan Soo Lan came into my life. She was the immediate neighbour of my cousin sister-in-law, i.e. the wife of my cousin who was the son of my youngest aunt. We all called this aunt "suai gou" or youngest aunt in our dialect.

Somehow, Ms Chan befriended my Second Sister and she came to visit quite frequently. In the cause of that, she got to know me as well.

She was six years my junior.

She was sixteen and I twenty-two when I obtained my Senior Cambridge School certificate. I then became a teacher at Kay Wah Public School - the same school where I had completed my Chinese P6 education. The year was 1958.

Chan (that's how I addressed her) was a friendly person with bright sparkling eyes. She would visit me even during Chinese New Year to exchange oranges for Good Luck and Prosperity.
She lived in a village at the end of Choa Chu Kang; I lived almost at the end of Lim Chu Kang.

Not long after knowing each other, we started to write letters to one another. We enjoyed writing but did not touch on the sensitive subjects of Love or Marriage.

Very soon news and rumours of her and me being an item spreaded like wild fire. My parents came to know about it too. They were not for it as there was a six-year gap in age between us. It was not considered a good match. Chan's horoscope was Snake and it was claimed that it clashed with my Pig.

Nevertheless, we exchanged photos. She gave me hers, which was taken with her younger sister. And I gave her mine.

The storm of rumours gave us a lot of unpleasantness, so we decided to meet each other one night at a temple wayang show. It was an event to celebrate the birthday of the temple's main deity, Kuan Gong. The temple was in Ama Keng village.

My sister told Chan that I would be waiting for her in a dark corner away from the wayang stage and prying eyes.

At the meeting, Chan told me it was her neighbour, that young sister of my cousin-in-law, who had been spreading rumours that she was 'chasing after' me and that she was madly in love with me. In other words, she was ready to marry me!

To prove them wrong, she decided to stop our relationship. She insisted that we should just be friends.

My heart sank on hearing that. I was hoping for a more agreeable solution as my feelings for her was just blossoming.

As I could not think of any other solution to the problem, we agreed to remain as ordinary friends. But such an arrangement is difficult to last between opposite sexes. And so we slowly drifted apart.

I did not take it too badly as our romance was not too deep yet.  It made the separation less difficult.
Posted by BoysTowner1954 at 10:50