A Short-Lived Conflict Between Chinese and Indians 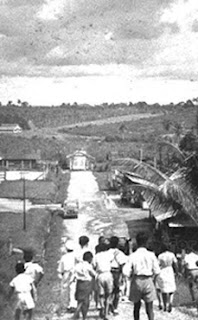 Not far from our enclave of 'refugees' was an Indian settlement at the nearby PWD quarters.

One day, in broad daylight, three Indian men came to our vegetable garden to steal. They had thought that nobody was around. Unfortunately for them, an old Chinese lady was just done doing her "export business" nearby in a makeshift toilet. She shouted when she saw what was happening. Some young men from our encampment heard her and came to her aid.

The Indians denied what they were doing and even said not to show off. One of them added that the Japanese would finish us Chinese off. That remark caused one of our young Chinese men to fly into rage. He was very strongly built and began raining punches on that Indian fella who was clearly not his match. He only stopped when that man fell flat to the ground. The other two Indians immediately turned on their their heels and fled, leaving their fallen comrade on the ground. I could still vividly remember them trying to leap over a two-metre wide drain in their bid to escape.

When the Indian man on the ground came to, he would have received more punishment if not for the rest who stopped that angry Chinese young man. Humiliated, he got up and limped back to his quarters which was some 1km away.

An hour later, a commotion arose as someone shouted that the Indians had returned to take revenge. They were on their way some 500m away. This galvanised everybody to grab some weapon to confront them. That same angry young Chinese took an axe. Raising it above his head, he ran fearlessly to meet the approaching Indian 'army'. His outburst must have frightened them for they looked unsure for a moment. They then turned back and ran back to where they had come from.

The other village young men ran up to that brave young Chinese to stop him from pursuing the Indians any further. This stopped the battle before it even got started. Later, to play safe, they guarded the village against outside intruders for the next few days. Fortunately, no further altercation between the races happened.