I set up and edited these blog entries for Mr Ang Leng Sze, my Art (and Sec 1) teacher from Assumption English School from 1976 to 1977, based on a memoir he has written. It's handwritten in black ink in a grey spiral-bound notebook. He had handed me his memoir during a visit I made to his office at AES in May 2012. He was an adjunct teacher then and still is. Mr Ang was not only a teacher in Boys Town English (the precursor to AES) but an Old Boy as well. He first studied at Boys Town from Sec 1 onwards in 1954, hence the title and address of this blog.

I have my own blogs detailing my years of growing up, doing national service and other adventures and felt Mr Ang's personal life journey required the same media so it could be accessed by a greater audience. Mr Ang is a well-loved teacher in AES. This is evidenced by the generous compliments students past and present pay to him. He had also been the school's scout master for a long time and helped the troops under him accomplish much. His 1411 scout troop was the first land scouts in the '70s to engage in sea activities raising funds to buy their own boats: a Boston whaler, a motorised dinghy, and an aluminium rescue boat. He had also received accolades from the Chief Scout of Singapore, President Wee Kim Wee himself.

Mr Ang is an intelligent and unassuming man with a kind heart for his students. They have learnt Math, English, Chinese and Art from him over their schooling years.

I am doing this to honour the life of Mr Ang. I am also doing this as part of my role as Ambassador of the Singapore Memory Project - a national effort to record the memories of Singaporeans caught in ever-changing living conditions and environments. Anybody who has lived on this tiny island of Singapore knows how fast the pace of change is. Five years on and the place looks very different. By capturing and recalling memories, it helps folks young and old keep a semblance of continuity and heritage. We did not get here by ourselves: We built on the shoulders of our forebears.

So please enjoy these stories from Mr Ang, an old Boys' Towner. My role is that of editor. Although I've tweaked his passages here and there, I've pretty much left his voice intact. His is a generation closer to my mom's; that of a Singapore which lived through war, self-determination and eventual modernisation to First World. Indeed much has changed and vanished. I thank Mr Ang for entrusting his memoirs to me and the carte blanche freedom to do something worthwhile with it.

Caption: That's me during 'Speech Training'. Mr Ang as form teacher of my Sec 1A class. 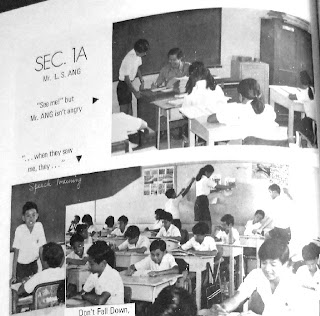