Fighting Over A Blunt knife 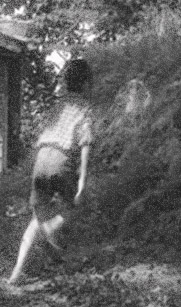 It was in the shade that we prepared food to feed the pigs. There water hyacinth, banana stems as well as sweet potato stems with leaves that were chopped into small pieces and cooked with other ingredients like rice bran and a kind of copra cake whose oil had been extracted. We threw in the dried skin of prawns as well.

One time, my sister who was 1.5yrs older than me, was using a somewhat blunt chopper to hack at some banana stems. I was fascinated and wanted to do the same, but she refused.  She took the knife and ran away. I was angry and ran after her. After a short distance, she gave in and dropped the chopper. I don't know why I did what I did but I picked up the chopper and slashed at her. She got hurt on the head and started to bleed.

I was very scared and ran away before my farther could get at me. I ran into the rubber estate and hid myself under some bushes. Thank goodness my father did not chase after me.

I was already sorry and frightened about what I had done. I hid in the bushes for what seemed like a long time until I heard my older brother (some five years older than me) come calling. Amongst my three older brothers, I liked him best, so I responded and came out of my hiding place.

He was not only looking for me but had brought steamed sweet potatoes as well. While I was eating the sweet potatoes, he advised me to go home. I was very concerned about my sister's condition and very afraid that I had killed her!

But my brother consoled me that she was alright. It was a shallow cut as her thick hair had cushioned the impact. And thank goodness the chopper was blunt! This reduced my guilt and so I followed my second brother back.

To my surprise, I was not punished by my dad, but only got a good scolding. Years later I would learn that this was because I was my parent's favourite child.