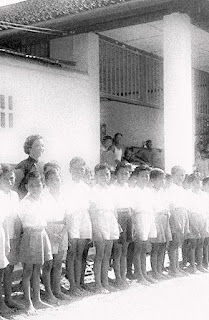 Life for farmers in Lim Chu Kang was as usual. We just needed to work a little harder to supplement our rations with sweet potato and tapioca.

During the first year or so, food was not a problem.  At least we had those tubers to eat. And sweet potato leaves made a very good stir-fry veggie dish with dried ikan bilis (anchovy) and chilli belacan. For protein, we had frequent seafood from the marshlands and river of Sungei Buloh.

While staying and earning a living on rented land that was owned by a Jewish fella named Cashin, my father and uncle had also bought a piece of land near Neo Tiew Road, about 1km off the main Lim Chu Kang Road. My uncle occupied half of this land leaving the other half uncultivated. It was overgrown with shrubs, lallang and undergrowth.

One day, in less than a year under the Japanese, our neighbour the Toh family's plot of land caught fire. This spread to ours and burnt off all the wild shrubs unintentionally. It actually left the place ripe for tilling!

My father did not blame the Toh family for the fire but thanked them sarcastically for a job well done. He then decided to develop the place into a farming unit. He roped in one of his cousins from China, who had no family, and my mother's brother who had just arrived from China before the Japanese invaded.

Together, they built a small house with wooden planks and thatched the roof with lallang. A pigsty and a chicken coop were also erected. My two uncles were then 'posted' to work there.

My eldest brother was sent to keep an eye on things. During the day, my dad would arrive to work with my uncles and go home to Cashin Estate at night.

My eldest brother must have felt lonely looking after two adults aged forty and above because one day, he asked my father if I could accompany him. My dad agreed. I was only six years old then and my brother, thirteen.

With all  my cousins staying just next to our plot of land, I was not lonely at all. Every evening after dinner, we would play on a track road that ran by. It was seldom used so it was still covered with turfs of grass. It was like a playground to us.

In those days, dinner was had before dark as the Japanese liked to practice emergency drills. Then all lights must be off.

At night my brother would teach me singing. In his school days, he had learnt quite a bit of anti-Japanese songs and so he taught me all he knew. Fortunately, none of the Japs ever visited us in the kampongs. I took it as a singing lesson without fully understanding what it was that I sang. Now I do.

One of the lyrics ran as follows:

"Brothers and sisters. Listen to me carefully. Nearby our East, there is a small region (meaning Japan).
For decades, they have been building up a strong army well-known for their superiority and aim to destroy China."

I also picked up many other anti-Japanese songs which my brother had learned from school. Luckily, we were never visited by the Japanese soldiers or our heads would have been chopped off and hung at the marketplace as a grave warning to others.

Although I was of school-going age, there were no schools in the village. The Japs were also not keen to make the villagers learn their language. The premises of the old village school were being used by the sex-hungry Japanese soldiers as a comfort station.

But my three-and-a-half years were not purely wasted. My brother who taught me songs was teaching me the English alphabet as well. Both upper and lower case. He taught me numbers as well.

I also learned the Times Table by heart, and read some Chinese Readers meant for the Primary 1 standard.

All these gave me an edge over the others when I eventually went back to school for Primary 1 in 1946. I topped the class of 60-over pupils - some of them older than me.

Although I was already 10 years old, I was double promoted for two semesters and managed to finish my Primary 6 Chinese-medium school education in about 5 years.

However, I was forced to quit school for half a year because of poverty. My family couldn't afford the school fees. But my parents fough hard to get me reinstated later. Half a year on, I was back as if my schooling was never interrupted. 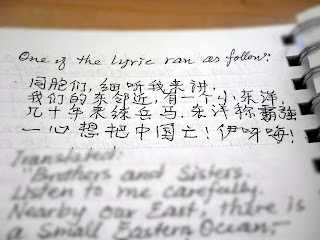