At The Crossroad Of My Education 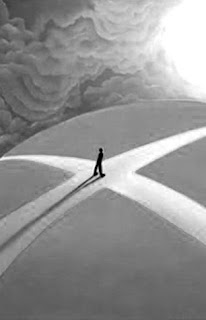 After graduating from primary school, the next stage was to enter  a Chinese middle school (i.e a secondary school). The nearest one was Chinese High, which was about 30km from my village in Lim Chu Kang. At that time, the Chinese schools were not financially assisted by the government and hence the school fees were very high - something my parents could not afford. Also the long journey (and transport costs there-in) made it a dream not to be realised.

The next option was to join an English school.

There was Bukit Panjang English School where the Ten Mile Junction is now. It's been demolished but has since been relocated to nearby Cashew Heights. But at the time, it only admitted P1 students of age six. Overaged pupils had no chance of being accepted.

At the time during the 50s, the government had just started to build English primary schools in the rural areas. The nearest one to my village was the one in Ama Keng but it was still in construction. The one along Jurong Road was already functioning and they took in Chinese school pupils who were overaged. So, I decided to try my luck.

My first day in Jurong Primary School was like this:

I went alone with my birth cert to the school. Feeling quite lost in the school compound, I was approached by an Indian teacher who nodded his head in my direction as if to ask can I help you?

I thrusted my birth cert at him and presumed that he knew I wanted to join the school.

He then asked me: "Can you speak English?"

I said a little, sir, as I'ved been coached in my Chinese school.

Without another word, he signalled me to follow him. He took me to his class.

As we entered, someone called out new boy! New boy!

The teacher then took out an English Reader and asked me to read. I jerked along, softening or skipping words I did not know. After a few lines, he said: "Ok. Go and sit down."

Next period, another teacher came in. That same boy who had shouted new boy pointed at me and said, "Sir, new boy!"

I found out later that he was called Wong Siew Chye. He was from another English school and could speak English better than me.

This new teacher walked up to me and asked, "What is your name?"

I stood up and answered (quite clearly): "My name is Ang Leng Sze." He went on:

I responded clamly and correctly to all these questions. We had been drilled before by our English teacher at Kay Wah.

Finally, he said: "Thank you. You may sit down." Siew Chye leaned over and whispered: "Good, man!"

That day, I bought my first textbooks and exercise books. The textbooks were Everyday Classic Reader Book II and Oxford English Course Book II. There were no books on Geography, History, and Science. But there was a book called Nature Studies.

More than half the pupils in my class had English background or had come from an English school. The others were like me, from another P6 primary school who could hardly understand English.

I remember there was this big sized Indian teacher who came in to teach Nature Studies. I did not know what he was talking about but kept hearing the word "mosquito". I was not alone. Later, all the Chinese-educated pupils in my class would refer him as Mr Mosquito!

At the beginning, I tried my best to pay attention. But I could hardly understand what was being taught. When the rest of the class laughed, we laughed along.

My classmate, Ong Poh Siak, nudged me and asked me in Mandarin: "Ni ting de dong ma?" - meaning if could I understand. I said no.

"Then how come you laughed?" he asked. I replied that when other people laughed, we'd follow.

The days went by, and more lessons were taught.

I loved lessons in Drawing or Art, as well as Handiwork. I also loved the writing lessons - not the essay type but to copy and repeat a line neatly in our best handwriting. I scored highly or topped the class in all these subjects. Fortunately, there weren't any textbooks in History, Geography or Nature Studies or else I would have seen Greek and stars. It helped that after these lessons, the teachers would condense all contents into 10 statements. For example, a statement might read: 'The female lays eggs in water', etc.

It was within my capabilty to learn these statements by heart and fill in the blanks correctly during tests.

At end-of-year exams, it was decided to put the better students formally into a Standard 4 class. It's unfortunate that I did not make it. The weaker lot of about ten of us remained in the Special Class, then known as Special 2; it was a new special class formed. I was just below the borderline of Std 4. Here's a comparison between the Old (Standard) and New education systems.

In the final exams of 1952, another boy and I scored very high marks, leaving a big gap between us and the rest of the class. So in 1953, we were double-promoted to join the Std 5 class, which was the same year I had to sit for my Std 6 Entrance Exams. It's equivalent to the present PSLE.

I struggled very hard to study for it.

It was also the time I began to understand the story books I was reading, titles like: Children of the New Forest, Heidi Grows Up, etc. But my English composition was still very weak. The same with my grammar.

After the First Term exam, I was positioned at 12th in a class of 15. In Term 2, I progressed to 8th, then 6th in the prelims of the entrance exam.

After the Std 6 entrance exams, 12 of us qualified to go to Std 6 (Sec 1). I was posted to Beatty Secondary School, somewhere along Jalan Besar and some 18.5 miles away from my home in Lim Chu Kang! Hence, the good news of having passed my entrance exam posed another big headache. Which secondary school to go to?