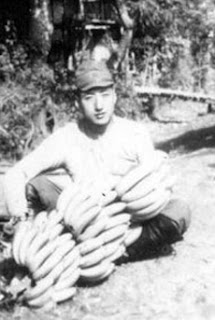 When the Japanese took over, Singapore was renamed Synonan-to. They were very fast to settle down. We in Lim Chu Kang were attended to very soon. Our area was put under the command of Regiment 10356 to control the farm products of Lim Chu Kang and Ama Keng. I still remember the Chinese wording of the unit's responsibility: Yi ling san wu liu bu tiu ya ma guan long chang (see pix below). The officer in charge was a Taiwanese officer who was quite high ranking. The villagers all addresed him as Tai Jin or da ren.

He was a very nice man very polite and soft-spoken. No one ever heard him shout nor lose his temper.

One day, the Japanese military came to see one of Lim Chu Kang's village head, a man who was a distant relative of Neo Tiew, the supreme head of Lim Chu Kang and whose immediate relatives were slaughtered cold-bloodedly by the Japanese earlier on. He had the surname Neo too, and was called Neo Hian.

When the Japs asked to see him, he was trembling with extreme fright. He thought the Japanese were going to do the same to him what they had done to the Neo Tiew family. His fear turned to relief when he realised that they were appointing him district head of Lim Chu Kang instead to take care of the villagers on behalf of the Japanese military. The Japs handed him a certificate of appointment. In his charge were 10 family-cluster heads each taking care of 10 families. Anyone who could write a bit would be appointed.

My eldest brother, who was then about 14 years old with a Chinese Primary 6 education was appointed to head a cluster of families (10). So was my uncle who had received only three years of primary education in China.

These heads were not paid. Their duty was to ensure that the members of each family were at home during the night. If someone had good reason to be away, he or she had to report to the cluster head first to obtain a permit and have details recorded down. Cluster heads reported to a district head.

After the admin network was established, the Jap military controlled all farm produce. Everything produced had to be sold to the Jap military personnel. The greatest incentive to sell to them were the additional rations of rice and sugar the farmers would get, depending on the value of the sale.

When pigs were sold to them, they were slaughtered at the village centre. The sellers were allowed to collect the blood and keep the pig inner organs. The farmers were also allowed to keep one pig for celebrating religious festivals.

Due to the shortage of meat and protein type of food, we villagers became fishermen during our spare time or even at night. The Sungei Buloh area in Lim Chu Kang is still a big stretch of swampland surrounding the Sungei Buloh River that flows into the Straits of Johor. We were never alone whenever we turned up to catch prawns along the river using a sort of scoop net afixed to two criss-crossed poles (see diagram below).

The area was particularly crowded with people during low tide trying to catch prawns, fish and crabs. There was always enough to catch as the supply from the sea could not be exhausted! And thus seafood became a part of our meals almost everyday.