Moving Out Of The War Zone 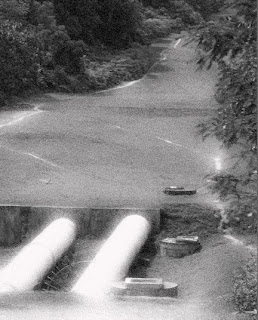 It was one fine morning early in 1942 that we moved out of Lim Chu Kang to a distant relative's place near the forest reserve in Bukit Panjang. We managed to hire a lorry from the Soh family to do that. But the place soon turned into a colony of refugees - each family vacating their homes to seek a safe place of refuge. My father, with the help of my elder brothers, were able to build a house from timber sourced from the reserve. Within a couple of days, we were sitting in our new house.

My father and brothers also built an air-raid shelter that we Chinese called a "fang gong hao" in Mandarin.

Our new place was near the two giant water pipelines from Johor. They were exposed to the surface and we kids enjoyed running and playing along them. But soon the war was getting more and more intense. The Japanese were firing cannon shots from Johore more frequently. We kids could hear the shells swish over our heads as we played on the pipelines, and hear them explode in the distance. As a matter of fact, we would play a game guessing how soon the shells would land and explode. We would shout "bomb" each time. It never occurred to any of us that a shell might land on us. But we got a picture how that might be when a shell landed in a vegetable patch some 200m away. It made a 2m wide hole that shocked even the adults. They did not realise that all that swishing sound could result in such powerful destruction.

Afterwards, we kids stopped playing the dangerous Swishing Bomb game. Instead, each time the shelling began again, we would see who could run fastest to the nearest air-raid shelter!

Note: Did you know that the invasion of Singapore began with the landing of the Japs at Lim Chu Kang?