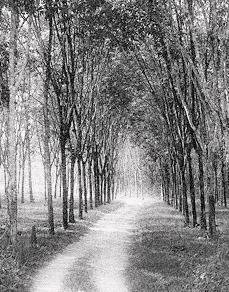 I was told that I was born in the Yio Chu Kang area at the end of Jalan Kayu Road. I checked my unnamed birth certificate and it has the address stated as Air Base Road.

I think I know how this hiccup happened. My uncle, who was tasked to go to the police post to report my birth a few days later (probably on the 9th of January), was afraid of being reprimanded by the registration officer for being late. So he simply said I was born the day before, which was the 8th of Jan.

I didn't stay in Yio Chu Kang long. Forty days after my birth, our family moved to start a new life in Lim Chu Kang. We had to move as the British were expanding their air base in Seletar.

My earliest memory of Lim Chu Kang is that of us living in a rubber estate that belonged to a Jewish owner named Cashin. There were very few families staying in the rubber estate then. The nearest neighbour was about one kilometre away. I was three years old when I became aware of all these.

A memorable incident happened one day around that time. I was outside and bumped into a midwife who had come to deliver the birth of my younger brother who is three years younger than me. I was wearing a ragged shirt and without any shorts or pants. When I met the midwife whom we all addressed as "bee see" (my dialect for nurse), I was embarassed. To make the situation worse, this Indian bee see said in our dialect "kua lan chiao" and demonstrated with hand signs how she would go about it. When I saw that, I cried and ran for my life, or rather for my all-important 'instrument'. Kua lan chiao means cutting away your little bird (penis)!
Posted by BoysTowner1954 at 07:16