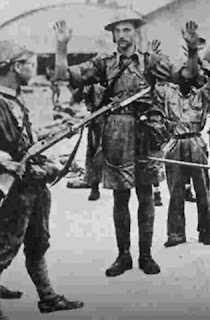 Without any settler's knowledge - no newspaper, no TV or radio broadcast, we soon found out that the British, led by one General Percival walked to the nearby Ford factory with a white flag and surrendered to the Tiger of Malaya, General Yamashita.

The next day, five Japanese soldiers with a Chinese interpreter came to our community. He explained that the British had surrendered to the Japanese and that we now belonged to a new set of masters.

The Japanese soldiers all looked pleased and smiled pleasantly. The interpreter taught us how to respect the Japanese by bowing to them. He also assured us that the Japanese were nice people if we were nice to them. "It's peace time now," he said.

"War is over and you can all go home and lead a peaceful life."