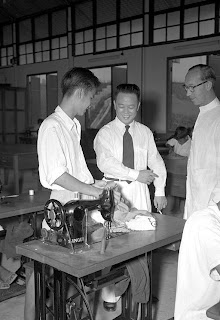 When Singapore was kicked out of Malaysia on 9th August, 1965, it was still a Third World country with a dubious future. We had no natural resources and the population was exploding as no family planning and birth control was enforced. I still remember vividly a cartoon drawing in the Straits Times newspaper entitled "Mr Chew Swee Kee's Nightmare". Mr Chew was the Minister for Education before the PAP took over. The picture showed children studying on bumboats on the Singapore River. They were so crowded that many children who could not get onto the boats were floating in the river holding their books to study.

This cartoon really reflected the plight of Singapore's state of education. Schools were few and badly built, especially those Chinese-aided schools in the rural areas. They would make use of the temple wayang stage as classrooms. Personally, I have taught for five years at Kay Wah Public School in Lim Chu Kang.; I was posted to teach at the branch in Ama Keng Village. We used the temple's wayang stage and partitioned it with movable boards to have two classrooms. Fortunately or unfortunately, the children of that era were not well fed as our present generation and were therefore not so active, noisy and did not take up much space!

After the PAP took over in 1959, Singapore became self governing but not an independant nation. Mr Lee Kuan Yew thought the only way for Singapore to survive was to merge with Malaysia, which the first Prime Minister Tunku Abdul Rahman had created by merging Malaya's 11 states with Sabah and Sarawak together with Singapore. So, in 1963, on the 16th of September, on Mr LKY's birthday, Singapore became an independent nation with special rights in education.

Due to the then political situation in Malaysia, which led to racial riots in 1965, Singapore was ousted from the Malaysian union. She thus became a independent nation of her own.

With LKY and all our first-generation leaders, they manifested the PAP ideal and policies and got down o work very hard. Singapore surely but slowly improved. By the 1970s, it became obvious that Singapore was doing very well. Goh Keng Swee's Jurong Industrial Estate took off and investment poured in. I, who used to give some tuition to supplement my meagre income, was glad that more and more parents are sending their children for tuition after school. So life had become certainly better. But we still struggled like mad.

Everyday, I would leave for work at Boy's Town English, leaving behind the three young girls with their mother. The worst time was when my wife had to go for her hospital appointment once a month at Toa Payoh Hospital along Thomson Road., about one km from my flat. She would bring the youngest, Susan, along, leaving Annie and Julie at home. Susan was then 3 yrs old in 1970.

My wife had to make sure she was back on time to prepare the other girls for school. I don't know how she managed then! But this situation affected her mood very much whenever she turned up for her monthly check-up. One of the first tests was to hold out her hands to see if she was calm. Because of her anxiety to get home on time, my wife would do poorly in this test. In her excited state, her hands would tremble. This gave reason for the doctors to tell her to keep taking her medication, which dragged on for three years. I was unhappy with this state of things, her treatment and not knowing when she would be cured. So, I decided to go see her doctor.

When I asked him when my wife's condition would be stabilised permanently, he suggested an operation. At the time, my former teacher, Mr Seah Cheng Liang, had a brother (Professor Seah Cheng Siang) who was a specialist in this field. I asked CL to recommend my wife to be his brother's patient; he did not hesitate and wrote me a letter on the spot.

After securing an appointment, we met Prof Seah at SGH in 1972 (I think). After reading the letter from his brother, Prof Seah gave us a broad and warm smile. He then took action immediately and ordered some tests. The results came back within two hours. I think Prof Seah must have given special instructions to his staff to have the blood and urine tests back quickly.

When we saw Prof Seah again, we were anxious. He was in his room with three Australian doctors. Knowing that my wife was not proficient in English, Prof Seah spoke in Teochew. "Your sickness is cured," he said.
"Your thyroid glands are functioning normal again."

He added: "But you are prone to worry a lot. Whenever you feel pressured or depressed, you just need to go see your family doctor."

My wife and I were pleasantly surprised to hear this bit of good news.

"Am I really recovered?" my wife asked, somewhat incredulous.

To assure my wife, Prof Seah pointed to the three Australain doctors and said: "They also agree that you are cured."

My wife told me later: "It's not the medicine that cured me, but Prof Seah's reassuring words."

I don't remember Prof Seah prescribing her any medication that day. But I remember the consultation being free! My wife insisted on a small token of payment, but Prof Seah refused.

Back home, we went to see our family doctor, Dr Tan Kian Yong, of Toa Payoh First Clinic. He also agreed that my wife's case was more a case of anxiety than thyroid imbalance.