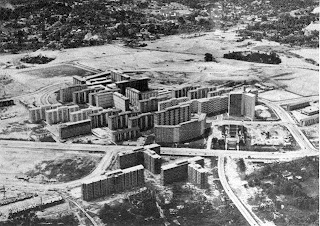 1965 was the worst year for Annie, me and my family - and Singapore as well. My father-in-law died of cancer in early 1965 at the age of 65. A few months later Annie developed a persistent fever. When her fever subsided, she complained of a pain in her left leg and could not walk by herself. I took her to the Singapore General Hospital and they suspected it to be case of polio.

They then transferred her to Middleton Hospital next to Tan Tock Seng Hospital, what is now the Communicable Disease Centre. She had to be warded for further observation and investigation.

The very heart-tearing part was when I had to leave her. Her little right hand grabbed one of my fingers and she implored me not to go away. But the nurses were quick with their tricks in separating us. Annie was soon forcefully carried away. I could hear her screaming "I want to go home!" repeatedly until she was carried to a far corner of the ward.

The nurse who attended to me kept consoling me with "Don't worry, she'll be fine here. We will take good care of her."

I really had a nightmarish time that night. This was followed by daily visits to her with different toys until we ran out of ideas. This tormenting nightmare lasted for 50 days until she was discharged and came home. Afterwards, it was followed by physiotherapy sessions at SGH for quite some time, at least till she was able to walk on her own again. By then, her left leg was thinned by the illness (as is usually the case) and she also became shorter. She walked with a limp. But hers was actually a minor case.

On 9 August 1965, Singapore was kicked out of Malaysia. Our then prime minsiter, Mr Lee Kuan Yew, was so sad he broke down while meeting the press. That memorable scene was captured on our black and white TVs; I could never forget it.

Singapore became an independent nation on its own. Luckily, we had tough and capable leaders in the PAP who turned crisis into opportunity. We have had capable leaders in Lee Kuan Yew, Goh Keng Swee, Lim Kim San, Hon Sui Sen, S Rajaratnam, and Toh Chin Chye.. They spared no time and got down to work immediately. From a swampy land, Jurong Inductrial Estate was created and investments from abroad poured in. More and more people were able to find jobs.

A home ownership scheme was introduced and Toa Payoh New Town was established.

I was among the first batch of that Scheme who moved into Toa Payoh. My registration number was 214; the year was 1967. Construction work was still very evident in Toa Payoh at the time. We bought our 3-room flat for $7,500 only. Spent $1000 or $2000 more to renovate it. By then, I also managed to own a second-hand Morris Minor sedan car which I bought at $2,000 with money borrowed from my mother-in-law and paid back at $50 a month interest-free. That year was 1965. The car came in handy in sending Annie to her physiotherapy sessions. Later, it came in handy when my youngest daughter, Susan, was born on 8th August 1967. To go out with three kids on public transport then was not easy. With our own car, it was a breeze.
Posted by BoysTowner1954 at 07:30