Birth of My First Child 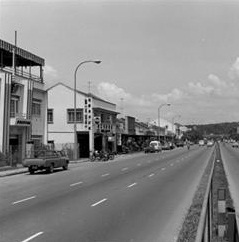 We moved into our new room in the Lau's flat in early 1962. On May 31st that year, my daughter was born. You know, it is both a mixture of pride and joy when you have your own child.

I wanted to give her the name Angelina Ang but my wife said it was difficult for her parents to pronounce, so we named her Annie instead. Her Chinese name was Kim Huang, or Golden Bangle. She was much adored by our neighbours as she was really cute and loveable.

As the renting of our room from Mr Lau was both temporary and illegal under HDB rules, we soon began to look for alternative lodgings.

There was a new row of shophouses coming up along Bukit Panjang where we found a room upstairs a shop. It was here that my second daughter Julie was conceived.

At the time, we had also applied for a HDB flat and was soon offered one. It was a 2-room rental flat located at Margaret Close, Queenstown. It was a rental because HDB had not started their homeownership scheme yet.

The flat consisted of a bedroom, a sitting room and a small kitchen. The toilet was combined. The rent was $55 inclusive of conservancy charges. We paid our PUB bills separately.

To get to school, I had to take two buses. I first took a Tay Koh Yat bus from Queenstown to Bukit Timah via Farrer Road. I would stop at the 7th mile market for breakfast. After that I took another bus to school. Despite the hassle I was never late (even though the standard of bus services could not be compared to today's). I think school started at 8 o'clock.

Soon, there were even pirate taxis plying between Bukit Timah and Queenstown. I would take one, costing me 15 cents a trip. This unauthorised service made life easier for me.

The birth of my kids was planned in such a way that they coincided with the school holidays. In this way I could be at home helping my wife. Annie was born during the June holidays of '62; Julie - the November holidays of '64. As for my youngest she was born on the eve of National Day in '67, which was the last day of school. I remember celebrating National Day just before that.
Posted by BoysTowner1954 at 06:45