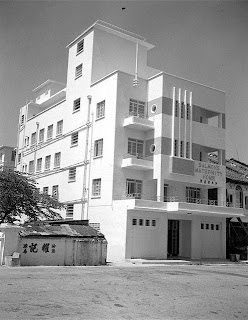 My first child was conceived in September 1961 when we were staying in a rented room behind the Peh Clinic in the centre of Ama Keng village. My wife then suggested we move somewhere near her parents' place so that her mum could come easier to help with the birth. Soon, we managed to get a place at Princess Elizabeth Estate. We moved in at the beginning of 1962. At the time, we registered our pregnancy case with the Salmon Maternity home in Princep Street. Dr Salmon was a Jew who had been running that maternity home for some 30 years. We was already in his 60s when we first met him.

On the night of 30th May 1962, my wife felt abdominal pain. Our landlord (whom we rented the flat from) drove us to the maternity home at around midnight. My wife was then warded to await delivery of our baby.

I visited her in the morning but the baby had not come yet. I felt miserable seeing my wife in such constant pain. I left and returned again in the late afternoon. I was happy to learn that her ordeal was over and that our baby had been delivered.

I met my mother-in-law who told me my wife took a long time to deliver. "Kah chew see beh mun," she said, which literally meant 'slow hands and feet' - a kind of harmless criticism.

I went into the ward and saw my wife talking cheerfully to a nurse. She saw me and pointed to where our first-born child was. I went over and saw a cute baby, perfect in every way. She had rich black hair just like her mum's.

I was told my wife needed to stay in hospital with the baby for another five days or so, depending on how fast she recovered. Alas, after ten days, she still could not pass urine and needed to be drained out each time. The doctor explained that because my wife was small in built, her bladder had been flattened during delivery and would take time to recover. My wife felt miserable upon hearing this. I was worried about the final bill but Dr Salmon assured me that it would remain at $130. "Not a single cent extra," he said.

Finally, on the 20th day, she managed to pass urine by herself and so, she and our newborn child, Annie Ang, left the hospital and together we headed happily for home.

Being first-time parents and not staying with our parents, handling a newborn was not easy. One time when I came back from a wedding (old classmate Lee Chan Moh's, I was best-man) I found Annie crying and howling. We tried all sorts of tricks but she just would not stop. Finally, her grandma came. She performed some water-sprinkling rite over her. Annie stopped her crying and calmed down. Grandma said it was for warding off evil spirits. I dunno, perhaps Annie was tired by then.

Finally, we were able to get to sleep. Annie laid on my chest the whole time that night.

Annie grew up well over the next two years, having only a slight fever or cough. We had a wonderful time with her and would bring her out often to make her happy. I would take pictures of her with my black and white film camera (colour film was not available in Singapore then). Many pictures were taken of her and some I even colored manually on my own using the Kodak's Color Photo Stamp.
Posted by BoysTowner1954 at 07:01