Getting Annie into St Joseph's Convent 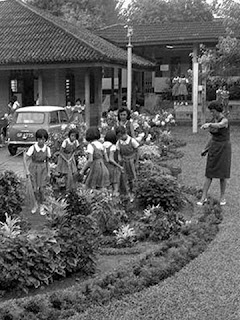 It had been our dream that our daughters should attend an all-girls school like the CHIJ convent. So, in the second half of 1968, it came time to register our eldest, Annie, for P1. Our aim was to register her at St Joseph's Convent (SJC). It was then still a full school. But the chances for the last phase was always very slim, especially with popular schools. So I decided to try my luck with the phase for former pupils or others related to the school.

I met the VP, Mrs Galistian, a very nice lady to whom I explained my rationale. I told her I had attended a Catholic school, Boys' Town English, and am now a teacher in the same school. By right, my children should be eligible for registration at my school but, the school did not take in girls. However, its corresponding school SJC, did.

Mrs Galistian was very sympathetic to my situation. She told me that so far there were still a few vacancies, left. It was almost the last day for this phase. She assured me that I stood a good chance as those who applied for this phase had all rushed to register on the first day. She promised I would be the first one in this phase at this stage. I then thanked her and waited for her good news.

Before the last phase of registration started, she called me to got to the school at once as there were still vacancies left. I'm still grate ful to her for allowing me that special privilege. I did not have to go queue up the day before dawn. Without any problem, Annie was successfully registered for P1 for 1969.

Our dream thus came through. Annie started P1 at SJC located at Hillside Drive off Upper Serangoon Road. As young parents, we wanted the best for our children. As Annie had suffered from a polio attack, her left leg was left slightly deformed - it was thinner than her right leg. It was also about an inch shorter so she walked with a limp.

However, it was considered a very mild attack and she remained independent in her movements. We engaged a piano teacher and sent her for lessons once a week. We also bought her Shanghai brand piano for $1200. On Sundays, we let the girls join some singing lessons run by a record company. But this company would up after some time.

We then sent Julie for ballet lessons ran by Television Singapore artiste, Lim Fei Siong. The lessons were conducted in an old bungalow in Marine Parade.

It was quite taxing having to send the family there for half the Sunday. About a year later, we quit ballet and let Julie take up violin lessons taught by a certain Mr Woon, who had conducted classes in her school.

When Julie went to P1, it was at Our Lady of Good Counsel situated in Cooling Close, Serangoon Gardens. It was an affiliate school of SJC. By then SJC had stopped accepting new P1 classes to ready itself as a full secondary school. However, Annie was still able to continue with her primary education there.
Posted by BoysTowner1954 at 07:49