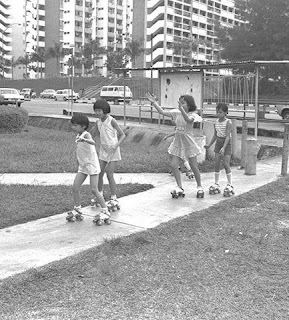 Not long after the birth of Susan in 1967, life became a struggle. Before my tuition business has picked up, we were living from hand to mouth. We even illegally rented out our front bedroom to a newly wedded couple, a certain Mr Lee. The rent was $30, inclusive of utilities. But some bad-hearted neighbours must have reported us to the HDB and we were caught red-handed. Luckily, I was witty enough to tell the HDB officer that the Lees were moving out soon. My tenant also lied that we were helping them out and that we did not collect rent. The officer believed our explanations and did not file a case against us. He said he would return a week later to check.
My tenant, Mr Lee, was very cooperative; he went house-hunting immediately. He managed to find a place and moved out within three days. A week later the officer did return. He checked our place and was glad we kept to our words.

One day, while I was giving tuition to the Neo family children (two girls and two boys), my wife called me up and asked me to go home immediately, saying something had happened. She wouldn't tell me what. "You just come back at once," she said. I was both worried and sad, wondering what was going on. Driving my old Morrie Minor, travelling at more than 50 mph, I negotiated the narrow and crooked Choa Chu Kang Road into Bukit Pangjang village centre; there I turn right into Upper Bukit Timah Road, turned left into Adams Road, then Lornie and up that first flyover into Toa Payoh North and then Lor 1. My home was at Blk112.

My wife was glad to see me come back. But I was not shrewd enough to understand the stress of looking after three very young children. She told me she just felt worried and frightened after seeing an old aunty - the one who goes around selling curry powder - sitting at the side staircase doing some knitting and crocheting. However, my wife was calmer after I got home. We then went to the semi-charity clinic downstairs which charged little. Afterwards, she was given a reference letter to go to Toa Payoh Hospital. There, she was warded for observation and investigation for a few days. I had to employ a 12-yr old kampong girl to look after my daughters. My MIL also helped out on and off.

Now, I cannot imagine how I could have let a 12-yr old kampong girl look after my three babies and yet keep the house clean while I was at school and my wife in hospital. The year was 1968 (or 69). I was teaching in the afternoon session with only four classes together with four form-teachers, a Chinese lang teacher and a Malay lang one.

I remember one afternoon how our kampong girl (who was not used to being cooped up in a flat) carrying Susan in her arms and handholding Julie with the other, went on a tour around the new Toa Payoh Estate. I thanked my lucky stars that nothing untoward happened. It would really be a nightmare for me.

Annie did not go with them as she was already in St Joseph's Convent (I think). Soon my wife was discharged and confirmed as having hyper thyroid syndrome. She was put on meds and that kept her in control and well for the time being.
Posted by BoysTowner1954 at 07:46