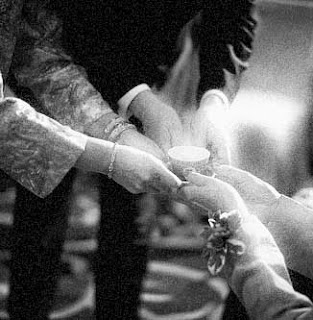 My father was very shocked to learn that my father-in-law was at work and absent from our Tea Ceremony. He felt there was something very wrong about it. To this, my wife gave a strong reason to support her father's action.

She said she loved her father more than she loved her mother. She was his favourite amongst the three daughters (including an adopted one). Her two elder sisters were all married. And having no son, her father had hoped that his younger daughter would get a husband who was willing to marry in. That was why she was the original sole signatory to her father's savings of $7000 - now worth at least ten times more in today's value.

Her second sister challenged this, seeing how attached she was to me. The family revolted. Her mother supported the second sister's claim to have half the money. The father gave in and so saw his hope of a man marrying into the family crushed. This was why he did not turn up at our Tea Ceremony and went to work as usual. He didn't want to be reminded of his crushed dream!
Posted by BoysTowner1954 at 11:06