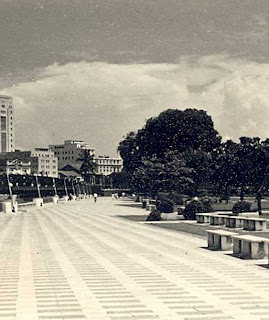 One day, at break-time during one of my National Service training sessions, my best friend and troop mate, Koh, told me that his pen-pal needed an English language tutor because she had transferred from Nanyang Girls High School to study English in a private school. As I'd just started to teach English as an untrained teacher, I agreed to give it a try. He gave me her address and soon I began writing to her.

She was both happy and grateful that I would help her voluntarily. We arranged to meet. The place was Rex Theatre opposite Tekka market.

I turned up punctually, dressed the way I'd told her I would: long sleeved white shirt, black long trousers, and black shoes. I would be carrying a brown Crocodile file. She would be wearing a colourful dress, high heels and her hair would be tied up in a ponytail.

The excitement and joy inside me was beyond description while I waited for her at the bus stop. I didn't have to wait long as a small-sized girl started walking up to me. She was smiling or grinning with joy, breathing or panting excitedly - not saying a word. And before I could finish asking her "Are you Ms Koh...." she had nodded her head a few times. She then said, "Have you been waiting long?"

We decided to head to the Esplanade or Queen Elizabeth Walk.

In 1958, this was a popular park fronting the sea when Marina Bay/South was still a sea. We sat together and talked for a very long time. We also decided that I should tuition her on my NS training days - either Wed or Thurs. I could reach her house after training at about 7.30pm. I would also go to her house on weekends for another session.

Not long after starting, I discovered that she was having difficulty in all subjects...from English to Math. Whenever I asked her, "Do you understand?", she would reply, "A little bit." Despite my fervent tuition, she did not do well in her exams. And so she decided to quit. She then took up a Singer's Embroidery Course. But we kept in touch. It was obvious that her parents liked me and considered me a prospective son-in-law. But they were not happy that I lived in a kampong.

My lady love at the time lived along Upper Bukit Timah, at the residential estate that was converted from some Japanese barracks. She was also against the idea of living in a kampong. Her parents demanded that we shift out after our marriage. But my parents were adamant that we did not.

At one point, she decided to call it quits on our relationship; I felt badly hurt. This was my second emotional turmoil.

I wrote her a long letter in English, telling her how I felt about being turned away from someone I loved. I wondered if she understood fully.

But there was some light. Both of our parents came to some compromise. Earlier, her mother and sister had come to meet with my parents at my house. They agreed that though we would not move out, we would stay in a separate house. Our kampong estate was six acres large with coconut and fruit trees and some vegetable plots. A house with a tile-sheet roof was spruced up and converted into a bedroom at one end, a sitting room in the middle and a kitchen at the other end. When all were ready, we got married on 26th December 1960.
Posted by BoysTowner1954 at 10:58