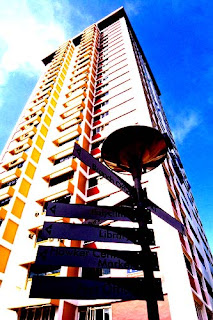 Our new home was in one of the three 25-storey point blocks at the eastern border of AMK. It was about 200m from Serangoon Gardens. The Central Expressway was not yet built and a short footpath led to a feeder service bus stop where we could catch a bus to Serangoon Gardens Centre. From there, we could transfer to other bus services to Upper Serangoon Road where my two daughter's school was. (St Joseph Convent is now in Sengkang.)

This so-called 5-room had three bedrooms and an L-shaped hall that was both the living room and dining area. The latter had glass doors that led to a spacious 8 x 8 feet balcony. The kitchen was slightly narrower than the one in our previous three-room flat in Toa Payoh.

The master bedroom was quite spacious and came with an attached bath. The other toilet in the flat was attached to the kitchen.

My wife and I of course, had use of the master-bedroom. My daughters they took the second bedroom in the middle between the living room and third bedroom.

The third bedroom was used for studies and tuition. Almost all my Toa Payoh students continued their tuition with me in Ang Mo Kio.

Tuition for extra income was common and necessary as the pay for teachers was very miserable then.

A qualified teacher like me was drawing only a $1000+ after 20 years of teaching. But prospects for teachers got better in the 80s (around '81 or '82, I think). Then Director for Education Mr Goh Kim Leung announced a substantial pay increase for teachers. I remember my pay scale (between $245 and $1670) jumped to a maximum of $3,600 per month with an annual increment of $50 to $100 as you went higher.

It was really good news and good fortune for the teaching profession. And there was further good news for me after this.

A non-graduate teacher like me who have distinctions in English Language, English Literature and Mathematics could get an instant increment for each subject. So in 1984, I decided to try my luck. I signed up for English and Maths at 'O' level as a private candidate. Very fortunately, I received distinctions for both subjects: an A1 for Maths, and an A2 for English Language. I immediately received an increment of $200 added to my pay.

But life is never a bed of roses. We also had our ups and downs.

My wife was getting very depressed at times - full of grumblings over very small things. I had to take her to a specialist about her case. I had thought her thyroid problem returned but the tests proved negative.

Our specialist doctor recommended her to see a pyschiatrist. But when the psychiatrist asked to see me and my daughters, my wife changed her mind. She was afraid that we would provide inaccurate information or worse, false statements. I think she could not simply take the change in lifestyle and environment. The same thing happened to her when we moved to Toa Payoh in 1967. She was someone who needed time to adjust and adapt.

My two daughters also had problems.

Susan's neck problem came back when she was in Sec 3 or Sec 4 and had to be operated on. The problem did not go away and would came back often, almost yearly. In the end, we changed the doctor to Dr Yeo Kiau Hian who did a very good job. Recurrence was less.

All these happenings reminded me of Sister Bernard's words: "What God has taken from you, He compensate you in other ways."

You get something good, you pay for something bad.
Posted by BoysTowner1954 at 03:08