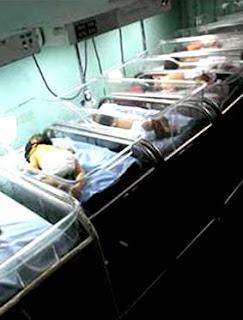 After marriage, Julie and Jeow (my son-in-law) applied for an executive flat in Choa Chu Kang. While waiting for their new flat, they stayed at Jeow's old place in Jurong West Neighbourhood 4. Julie then transferred herself from her workplace at DBS in Ang Mo Kio to the branch in Jurong, just a short distance away from her temporary home.

Soon after, good news arrived. Julie had conceived! Before we knew it, the little boy arrived safely on 1st of August, 1993 at Mt Elizabeth Hospital. My first grandson! We named him Augustine after his birth month.

A year or so later, Julie and Jeow were successful in getting their executive flat in Choa Chu Kang North 5. They moved in after renovations were done. In 1995, Julie became pregnant again, this time with a girl. We named her Marissa.

As Julie and Jeow were both working, they had to hire a maid (Ravina, a Filipino) to look after the children and home. As the maid was young - around 20+ - we had to drop by Julie's home as often as we could to supervise. In the morning, with me in school teaching, my wife would take a train from AMK to Yew Tee and from there take bus 302 to get there. I would join her after school to look after those two darling little kids.

By 4-5 pm, we would leave as Julie and Jeow would be home soon.

Ravina the maid left after two years. Her replacement was a Nepalese mother of one. She was very obedient and loyal in character but lacked initiative and ability. She had to be instructed all the time. I remember Julie having to write out an action list for her to follow - what to do, what to cook, etc. This maid returned to her home country after 2 or 3 years, which was typical. Next came another Filipino maid. But unlike the first, she was problematic. She had family problems back home, was often moody and unstable. She was later recalled by the agent.

The next maid, our present one, is Leny, also from the Philippines. She has been working as a maid for many years and thus experienced. She's the best so far. She's self-motivated and need not be told what to do. She also keeps the house very clean and neat. She came when my grandkids were of pre-school age. Now, Augustine is in Sec 5 and Marissa is in Sec 3!

Julie and Jeow upgraded to a private condominium in Choa Chu Kang (Palm Gardens) in 2001. My wife and I followed suit a year later and moved from Ang Mo Kio to Hillview Avenue. We had been living in AMK for 22 years!

From my new home, I could drive to Julie's in about 15 minutes; to my school, in about 10. At school, I continued to be re-employed as an Associate Teacher after my official retirement in 1996.