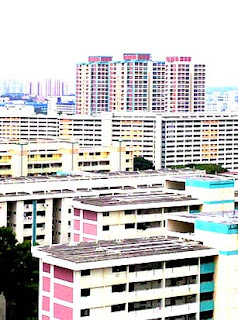 Ang Mo Kio was the third satellite town after Toa Payoh and bigger.

From north to south, its Ave 1 borders Ave 9 and Bishan Park. Ave 2 and Ave 12 ran from east to west. Much of the estate was still under development when we moved in. The town center was under construction.

However, our neighbourhood was complete and had a wet market and shophouses. The wet market itself was just 200m from our flat. A feeder bus service plied past our place and would bring us to the town center where many more services terminated along Ave 3 where the AMK Hub is today. As AMK developed, more bus services were added and a bus terminus was eventually built in the late 80s. It was connected to the MRT station by an underground passage that cut across Ave 8.

From the east side of this avenue, direct trunk services to the city, Bedok, Tampines and Marine Parade would run. There were also direct trunk services to Bukit Merah Town Centre as well as Queenstown along the western side. There was also service 169 that ran from AMK to Woodlands Interchange. But till now, there isn't a bus service that runs to Choa Chu Kang or Bukit Panjang from Ang Mo Kio. Actually, come to think of it, AMK residents have been pampered with the many bus services that connect to many parts of the Singapore island, not to mention the many feeder bus services that run within the estate.