My Teaching Career and Official Retirement 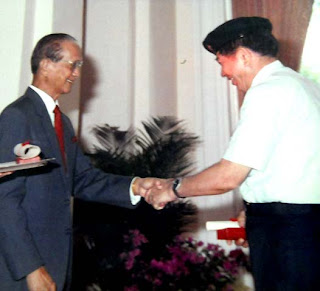 My first teaching job was at Kay Wah Primary School. I started on 13th January, 1958 teaching English. It's the same school I had attended as a kid, completing my education in Chinese with English as a second language.

I had sat for my Senior Cambridge Certificate exams in 1957 and obtained a Grade One certificate. So I returned to teach English at the same school. English was then a compulsory 2nd language at this government-aided school. Its first language was Chinese. It remained so throughout the 50s and early 60s.

In 1959, I started my teacher training proper at the Teacher's Training College on a part-time basis. If I taught in the morning, I then went for my training in the afternoon, and vice versa. The training was 3-4 hours a day, three days a week.

After struggling for three years, I obtained my Certificate in Education and began teaching as a qualified teacher in 1962.

I left Kay Wah on 31st December that same year and began my career with Boys Town English School on 1st January 1963. BTES was the old name for the current Assumption English School. The school's name was changed after it took in girls at the secondary level in 1973. The primary level was still an all-boys primary school.

1973 was the same year I stopped teaching at the primary level and moved on up to the secondary. I had majored in Art during my teacher training and it so happened that the newly co-ed secondary school needed an Art teacher. So I was pushed up to teach Art there. At the same, I was asked to design the new Assumption English School badge and flag after a competition amongst the students failed to find a suitable solution. Thankfully, both designs were officially accepted and signed off by then director and founder of Boys Town, Brother Vincent.

After I started teaching at Boys Town, I grew attached to the school. Much of it had to do with the kind of work and commitments I had. For example, I was made Scout Leader of the school's Scout and Cadet Scout (primary level) Troops. I held this responsibility from 1963 till 1996.

I was also an active member of the Boys' Town Old Boys' Association, now known as Boys' Town Alumni. We were very active during the late 60s and early 70s when we used to organise Talentime for Schools in order to raise funds for the Alumni's scholarship fund.

To me, my time with Boys Town was/is not just a job or career, it's everything in my life.

So in 1996, when time came for me to retire, there was great sadness. It was compounded by the fact that the old school had been rebuilt and newly opened. It now boasted of two state-of-the-art Art Rooms - something I had longed for over 20 years. I had all along taught Art in that meantime without a proper Art room.

I felt disappointed that I had to leave just as new facilities were available. But then I remembered something that was said during the retirement seminar I had attended. I could continue as an Associate Teacher if I so desired! So I approached the school's principal then - Mrs Susan Thomas - about it. She advised me to write in to MOE, which I did. My application was successful and so I started work again on 9th January 1996 - a day after my official retirement on the 8th.

Towards the end of 1996, Mrs Thomas asked me to sign up for another year. This went on year after year until 2005 when I was asked to take over Sec 1 Art so as to hand over the upper secondary (graduating) classes to new teachers in case I left.

My schedule became quite full. I had eight Sec 1 classes with 2 periods a week. It was quite the change. You see, for the last ten years, I had been dealing with Sec 3 and Sec 4 students preparing them for 'O' or "N' level Art exams. I became quite lost when I suddenly had to teach Sec 1.

The problem was communication.

The students either didn't get what I was telling them or they just couldn't be bothered with what I said. A few rowdy girls and boys and there would be havoc in class. Many of them were very restless or active.

A few would forget to bring their Art materials too. Some just wouldn't listen. A few found the spacious Art Room a nice place to run about. When I approached the misbehaving pupil, he/she would run away, round the room, expecting me to catch them. I was not young anymore to play 'catching' with them!

The experience with the Sec 1 classes in 2005 was both stressful and unpleasant. I decided then to step down as Associate Teacher with full load and duty. Instead I would take up the new post of Flexi Adjunct Teacher where one could sign up to teach a limited number of hours over a period of time. Mine was in the 27 hrs per week category, usually for 10 weeks a Term.

Suddenly my workload became much lighter. Sure, my pay was affected: It was reduced, I don't get paid during the school holidays, and there would be no year-end bonus. I was also not entitled to any promotion. But it was so much stress-free!

All I had to do was assist the teacher proper (usually a young one) and guide her along. Or to co-teach the upper secondary classes or Normal Technical ones. I no longer took the lead but played second fiddle instead. It was indeed much more relaxing. I just did my best to support and help out the main teacher however I could.

I am still a Flexi Adjunct Teacher in the school and hope to be there as long as I am able and needed!

[Editor Note: Mr Ang has finally announced his retirement from teaching on 1st Jan 2013, almost 17 years after his official retirement on 8th Jan 1996. He had returned as an adjunct teacher then. Thank you, Mr Ang, for what is almost a lifetime of service to your students and to Assumption English and Boys Town. They are definitely poorer without your presence and contributions!] 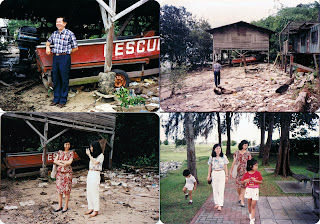