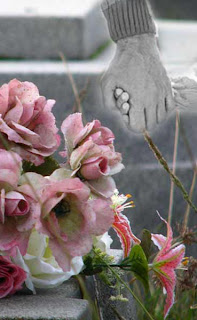 Annie began having a fever sometime in March. After seeing Dr Chiam at Blk 111, she did not improve. She kept vomiting even after a bit of food and drink. Her condition worsened on the 2nd day, so I decided to take leave from work and bring her to see Dr Tan.

I went to his clinic, took a queue number (no. 13 it was) and begged him to come to my house. But Dr Tan said he did not want to be pressured with so many patients waiting. I had no choice then but to rush home and carry Annie into my car and drive her to the clinic. Dr Tan kept his promise to attend to her immediately when we arrived. He discovered that her blood pressure was very low. He wrote up a reference letter and instructed me to send her to Toa Payoh Hospital, then known as Thomson Road Hospital.

When we arrived, we went through the usual registration routine and waited. I couldn't bear to see Annie suffering, so I told a doctor that she was very ill. He looked at our reference letter and did a bit of examination. He then ordered Annie to be admitted straightaway.

Later in the afternoon, the staff there decided to transfer Annie to SGH where better facilities were available. I followed in the ambulance which was an old Volkswagen boneshaker. I imagined how badly Annie must be feeling riding in that rickety thing.

Finally, we arrived at SGH and Annie was immediately whisked away to the Emergency Room. It was airconditioned, not typical in those days.

The nurse then did all the preparatory work of attaching tubes, etc, to Annie. She did not like it a bit and screamed and cried out. Suddenly, she was silent. Before I knew it, doctors from everywhere were rushing in. I was told to go outside and wait. Apparently Annie had collapsed, why the nurse had sent for help.

I could hear a doctor asking the nurse why she did not send for him earlier. To this, the nurse replied that Annie was ok before she collapsed.

"Shock her," I heard, followed by two pop-pop sounds.

Then suddenly I could hear Annie crying out in pain. Her voice then faded away. That was the last I heard from her.

Before she was transferred to SGH, she had asked me, "How about my studies?" Though not a top student, she was consistent and worked hard.

I was praying and waiting outside when I saw the doctors all come out from the ER. I heard a doctor comment, "That girl in the ER could have been saved if..." I don't remember the exact words. What he said told me what to expect, something I'd never have imagined that I would go through. I moved forward to find out more. One doctor, the leader I assumed, said, "So, you are the father of that patient?" I nodded. "Sorry, your daughter has just passed away." I wanted to rush into the ER but the nurse there stopped me. "Let him in!" that same doctor ordered.

Inside, Annie was lying under a piece of cloth. Trembling, I lifted it. What I saw filled me with tears. Through that haze of grief, I asked her, "How you want me to tell your mother now?"

I repeated the question for I don't know for how long. My tears fell on Annie's gentle face. Though I wiped them away, my own tears would not stop.

When I finally recovered myself somewhat, another nurse was standing by my side. "What should I do next," I asked her. She told me I could claim the body in a few days, failing which, the hospital would take over if it remained unclaimed.

Feeling utterly lost, I took a cab back to Thomson Road Hospital to drive my car home. I was all quiet in the taxi. I couldn't even answer the cab driver when he asked, "Not feeling well?"

When I reached home, my wife was all ready for the bad news. I just threw myself onto the sofa and cried. That said everything; she didn't need to ask. She did her best to console me but I was unconsolable for quite some time. Devastated as we might be, we still needed to get on with life. I suspended all my tuition for that week. Next, we went to see my colleague and friend, Mr Ng Heng Peng, who stayed at Blk 124 to say that I would not be able to fetch him and the others to school for a while. Mr Ng was not there so I left him a note. It read: "My Annie has just passed away. I will not be going to school for a few days. Please tell Mr Chiam."

At the time, I was also involved in a school tuition program for needy students. There were more than 10 teachers from various schools. A social worker from that program came to see me that day. Through her,  the others knew of my misfortune.

Mr Ng came to see me with his wife after reading my note. When he found out that I had not informed my parents yet, he volunteered to go all the way to Lim Chu Kang to their home to do just that. Back then, there were no phones in the rural areas such as Lim Chu Kang. Even in our new HDB town, getting a phone took 1 year. So we could not telephone my parents at all.

Bad news spread fast. That group of voluntary tuition teachers at First Toa Payoh School paid me a visit after their classes. Parents of my own tuition students also came by to express their condolences. My school colleagues also came in groups to visit me at home. Many also turned up for Annie's funeral. All these kind gestures helped to dilute my grief a lot.

By the time Mr Ng informed my parents, it was already evening - my dad could not rush down to see me. He came the next morning. I was outside, standing in the corridor. When I saw him, I was so overcome I started to sink to my feet. My dad and I were close. When my father saw that, he rushed up to me, arms out ready to catch me. I can never forget that scene. Later, he accompanied me to the undertaker shop to buy a coffin. We chose a presentable one as I wanted Annie to feel comfortable in it.

The funeral itself was set for the next day. My father and I, together with two of Annie's cousins, went to the mortuary at SGH to claim her body. It was wheeled out for me to identify. Afterwards, the undertaker dressed her up. I don't know how to describe my feelings then. I was told not to touch her or her nose would bleed. It was common belief that blood-relatives of the dead cannot touch the body because of this.

My father could not believe that Annie was dead: she looked as pretty and lovely as she was alive. He placed his hand on her forehead and called her name, hoping she would wake up. Lo and behold, Annie's nose started to bleed. I quickly dragged my father outside. He broke down uncontrollably. It turned out that I had to console my father instead.

Finally, when the undertaker had dressed and laid Annie into the coffin, we were asked to take a last look before the coffin was closed up. When we were satisfied that all was neatly done, we all made our way to Kong Ming San where she was to be cremated. My principal, Mr Boivin, and representatives of teachers from all the subjects and ECAs were already there and waiting.

When Annie's coffin was put into the fire, I was devastated. My colleagues tried their best to console me. Some stared sympathetically but was uncertain what to do. Mr Boivin hugged me tightly and rubbed my back to loosen up my tense body. It really made me feel better at the time.

The next morning, we had to go through yet another heart-wrenching time when my wife and I, together with our daughters Julie and Susan, went to the crematorium to collect Annie's remains. Her small heap of bones and ashes were already sorted out from the wood ashes by the staff there. How would you feel if your beautiful daughter was now a pile of burnt bones and ash? Yet, we treasured her in everyway and so, bit by bit, we picked up her remains and placed them inside an urn where she would rest forever. The whole time, I was really hurting inside.
Posted by BoysTowner1954 at 08:15